Kobe Bryant left a lasting sneaker legacy on the basketball world and it will never be forgotten.

It's rare for a player to come into the NBA and have a gargantuan impact on the entire sport as a whole. It's even rarer for that same player to change the game when it comes to the actual shoes the players wear on the court. In order to make that kind of impression, you have to be a special talent who only comes around once in a generation. From the early-2000s to the mid-2010s, that player just so happened to be 5-time champion, Kobe Bryant. When it comes to Kobe's sneaker output, there are so many incredible models to choose from, and if you are looking to secure a pair, or even sell some, then eBay might just be the solution you are looking for. EBay has numerous policies in place that protect both the sellers and the buyers. For instance, all pairs are sent through Sneaker Con's special sneaker facility, where all shoes go through rigorous authentication processes. eBay's Authenticity Guarantee lets sneakerheads sleep at night knowing their rare and retro sneakers are real. Not to mention, the brand also offers no sellers fees on shoes over $100 USD. Their vast collection of rare shoes encompasses Kobe's storied history, and if there is a particular pair you've always wanted to own, chances are, eBay has it.

Kobe's sneaker journey was certainly a rocky road at first. His days with Adidas were not fondly remembered by sneakerheads, although his sneaker free agency was the stuff of legend. Kobe would wear any brand that sent him something and eventually, he signed with Nike. Together, Kobe and Nike delivered a fleet of incredible signature sneakers to the masses all while creating new trends that have left a lasting impact on today's crop of NBA stars who have their own signature shoes. Unfortunately, the Nike x Kobe partnership is officially coming to an end which is news that was announced just a couple of weeks ago. At the end of 2021, Nike will stop selling Kobe-related sneakers and as everyone can imagine, it has led to some increased levels of scarcity on the market, which has also increased the value of his shoes.

Following a whole year of being courted by numerous brands, Kobe signed to Nike in 2003 although he wouldn't get a true signature sneaker with the brand until 2005. For the better part of that year, Ken Link began designing a shoe for Kobe that fit the vibes of the time. Pretty well every player was wearing high-tops or mid-tops, and this shoe was no different as it had a stealthy yet bulky design. Pairs of the Nike Kobe 1 eventually started to hit the market in January of 2006 and on 22nd of that very same month, Kobe dropped 81 points on the Toronto Raptors while wearing a white, purple, and black colorway. Eventually, this Player Exclusive got a retro in 2019 and it remains one of the most iconic shoes to ever grace Kobe's feet. While the Nike Kobe 2 and Nike Kobe 3 were cool, Kobe's real impact began with the Nike Kobe 4, which debuted during the 2008-2009 season. This was a special time for Kobe as he had just come off of a loss in the NBA Finals, and he was about to win two-straight titles, cementing on-the-court legacy. Kobe knew that he needed to do something special with his signature sneaker line, and he did just that as he shocked critics and consumers with a low-top shoe. When playing basketball, you need adequate ankle support, otherwise, you could be risking injury. Well, Kobe didn't seem to care about all of that because he stuck to his convictions and completely changed the course of basketball shoes with just one silhouette. When the shoe originally debuted, there were people who told him it just wasn't going to work. This fueled Kobe who came through with hilarious promotional campaigns including ankle insurance, which poked fun at the notion of these shoes causing injury.

Needless to say, the Kobe 4 proved to be immensely popular and his success out on the court forced people to take notice of what a low-top could do for someone's game. These days, even big men can be seen wearing low-top shoes and when it comes to new signature sneaker lines, most of them are low-tops. From the Nike KD to the Nike Zoom Freak 1 to the Nike Kyrie series, there is no denying that these shoes would not exist if it weren't for Kobe's foresight.

Following the success of the Nike Kobe 4, Bryant continued on with his low-top journey as he unveiled the Nike Kobe 5 which was a subtle deviation from the previous model. Kobe would go on to win his fifth and final NBA title in these shoes and it was the "Big Stage Home" colorway that got those Game 7 honors against the Celtics. That white and gold pair were an immediate hit amongst fans and when you think of the Kobe 5, you think of that specific colorway.

While the Kobe 5 was a great model, it was the Kobe 6 that truly elevated Bryant to sneaker GOAT status, and it is all thanks to one colorway: "Grinch." For decades now, the NBA has played games on Christmas Day and the Lakers are always part of those festivities. Surprisingly, no player had ever thought  to wear shoes that actually paid homage to the day's festivities. Well, Kobe changed that with a green and yellow pair of Kobe 6's that immediately made you think of Dr. Seuss' grouchy creation. Original pairs of these sold out immediately and the retro rerelease from 2020 experienced the exact same fate. Now, this shoe will never be released again, which means if you want a pair, sites like eBay are your best resource. With the success of the "Grinch" model came Kobe's second major contribution to the sneaker world: Christmas-themed shoes. The following year in 2011, LeBron James debuted a "Christmas" Nike LeBron 9, all while Kobe came right back with a purple and yellow Christmas Kobe 7. The following year, Kobe dropped the Kobe 8 in a unique Christmas sweater offering, which found itself dueling with Christmas models from Dwyane Wade and Ray Allen. In the years that followed, some of the league's best players continued the Christmas tradition and well after Kobe's retirement, the Holiday motifs still run strong. It's yet another example of how Kobe was able to set trends all while capturing our imaginations. 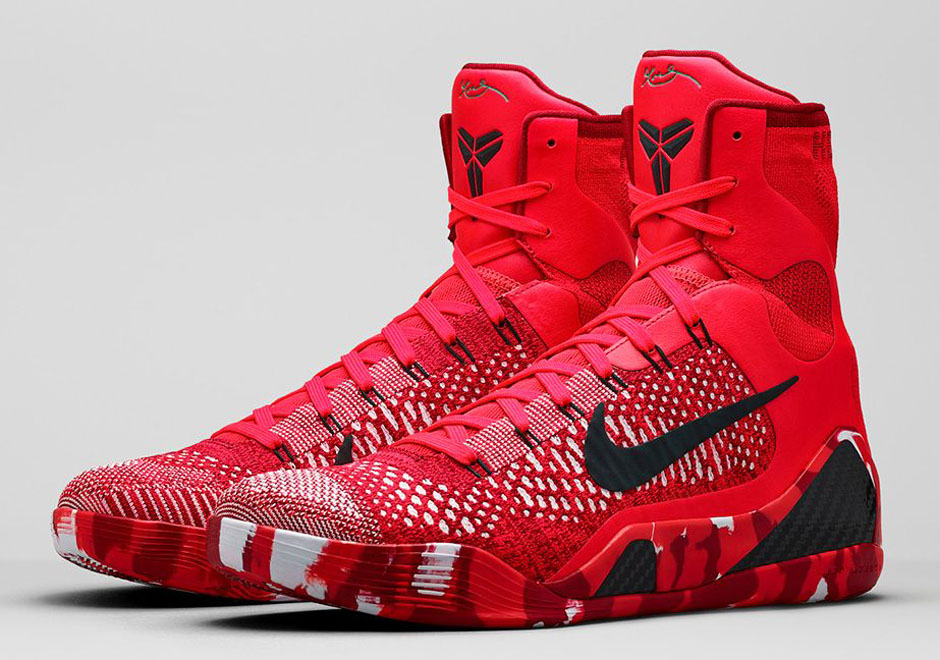 To end his career, Kobe dropped two low-top shoes in the Kobe 10 and the Kobe 11. However, in between that, Kobe got experimental and downright maniacal with the Nike Kobe 9 Elite. Coming off of an Achilles injury, Kobe wanted something that would give him support in both his ankles and his calf. This ultimately led to a humongous high-top that helped bring Lunarlon midsole technology and flyknit materials to the basketball world. These two innovations are still found in basketball models, and the boldness of the Kobe 9 Elite remains impressive. While it won't be getting a retro, it's a shoe that cements Kobe as a man who was willing to take risks with his brand, which is extremely commendable.

While we were lucky enough to get retros of the Kobe 5 and the Kobe 6 over the past couple of years, his Nike output from 2011 and beyond won't be coming back anytime soon. These sneakers have now become their own makeshift time capsules that will have you reflecting on some of the best years in the NBA's history. A time where we got to see Kobe doing what he does best on a nightly basis, defying expectations and inspiring a whole generation of basketball players. As sneakerheads, all we can do is tip our hats to the man and rock his sneakers with pride when we go to hoop at the local courts, yelling "Kobe" after every jumper.

Let us know your favorite Nike Kobe sneakers in the comments below.