The new silhouette is getting a stealthy makeover.

Nike has been doing its best to build anticipation for next year's lastest Air Max release, the Nike Air Max 720. It's a pretty interesting sneaker. Much like the Air Max 270, it has a large air bubble. Except this particular model has the air bubble wrap all the way around the shoe instead of just the heel. With a few colorways revealed already, Nike is now showing off the colorway we all kind of knew was coming.

Much like pretty much every shoe ever released, the Air Max 720 will get a "triple black" version for all of you out there who hate seeing even the tiniest speck of dirt on their kicks. 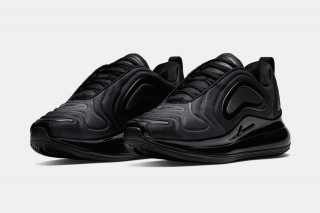 The shoes have a futuristic molded upper that is sure to turn a few heads. This particular design is in line with the current dad shoe trend that has sneaker companies going with a more maximalist approach to how they tool their sneakers. Perhaps the most stealthy part of this sneaker is the air black air bubble which is in a darker, flashier tone than the rest of the upper.

There is no confirmed release date just yet but considering Nike likes to drop new Air Max models close to Air Max Day in March, these are probably just a couple of months away.